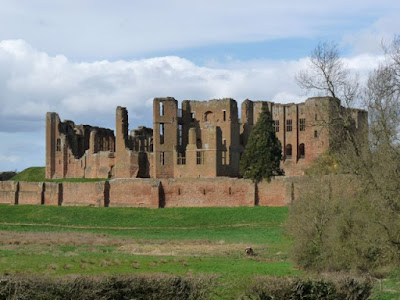 Above and Below:
Kenilworth Castle where Queen Elizabeth I was treated to Echo Verse. 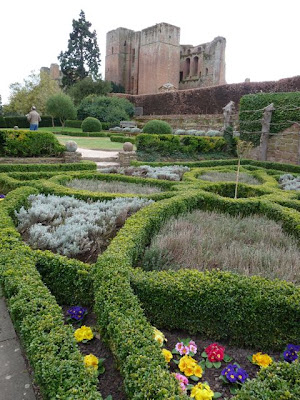 Kenilworth Castle has been in the news a lot this year on account of the amazing £2.1 million restoration of the Elizabethan Garden, based on the description of the garden in a letter of 1575. Articles are appearing on this enchanting story. Recommended ones are listed below:
The central feature of the Elizabethan Garden incorporates a back-to-back marble statue of two Atlantes, who balance a globe-shaped water fountain on their shoulders. You can read more about the reconstruction project on The Architects' Website and also on Patrick Baty's blog, News from the Colourman. 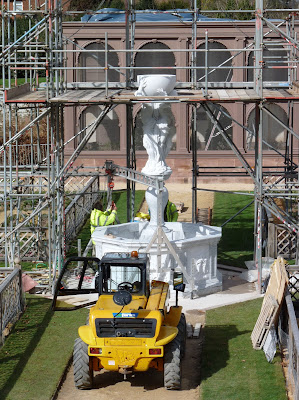 The Atlantes in the Elizabethan Garden reconstruction at Kenilworth
Spring 2009
In the run-up to National Poetry Day on Thursday 8 October 2009, The Daily Telegraph for Saturday 3 October 2009 features a new poem by the Poet Laureate, Carol Ann Duffy, entitled 'Atlas'. The poet is concerned with climate change, and the poem alludes to the giant's precarious balancing act as he bears his fragile but precious burdens aloft. The accompanying picture (which does not appear in the online edition) looks much like the Atlantes at Kenilworth, and I began to wonder if there was a difference between Atlas, the Titan with the terrestrial globe on his shoulders (Greek: Ἄτλας), and the Atlantes. I suspect that the names can be used interchangeably, but please advise me if you know otherwise!
Plato informs us, incidentally, that the first king of Atlantis was also named Atlas; but that although he was Poseidon's son, he did not number among the immortal deities.


*
There have been many British exponents of Echo Verse through the ages. Those listed below represent a small selection of them.

Gascoigne attended Lord Leicester at Kenilworth Castle during the summer of 1575, and helped with the entertainment for the visit of Queen Elizabeth I.

Scholars have not always found it easy to tell whether some works come from the hand of Shakesepare or of De Vere, the 17th Earl of Oxford. Oxford, it seems, wrote a poem called Anne Vavasour's Echo (sometimes written as Anne Vavasor's Echo). It resonates with Shakespeare’s echo verse in Venus and Adonis, and some have linked Vavasour to Shakespeare’s ‘dark lady’ of the sonnets. Edward de Vere’s lines on Romeo are particularly witty: the echo of the hero’s name is ‘eo’, which can also be read as the initials for the Earl of Oxford:

I would tear the cave where Echo lies,
And make her airy tongue more hoarse than mine,
With repetition of my Rom-eo's name.

His sister, Mary, Countess of Pembroke was married to Henry, the eldest son of William Earle of Pembroke.
Shakespeare (1564-1616) 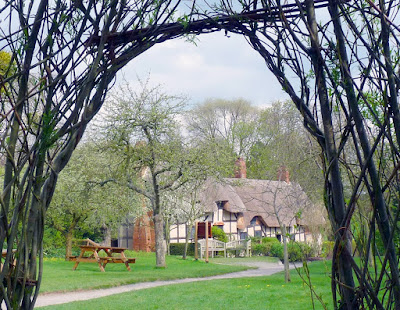 Halloo your name to the reverberate hills
And make the babbling gossip of the air
Cry out.
Twelfth Night, Act 1, Scene 5, Shakespeare
Barnabe Barnes (1569-1609)

Richard Barnes, son of Dr Richard Barnes, the bishop of Durham entered Brasenose College, Oxford, in 1586. He did not graduate, but in 1591 he accompanied the Earl of Essex on his expedition to Normandy. Barnes published Parthenophil and Parthenophe in 1593. He was prosecuted in the Star Chamber in 1598 on a charge of attempted poisoning, but escaped to the north of England.
John Donne (1572–1631)

I have yet to find a true example of 'echo verse' (in the sense of Herbert's 'Heaven') from Wroth, but she writes about Eccho. Wroth was Robert Sidney's daughter. Robert, himself a poet, was brother to Sir Philip Sidney and Mary Herbert, Countess of Pembroke.
Richard Brathwayte aka Braithwaite (1588–1673)

Drunken Barnaby's Four Journeys records the dubious hero's pilgrimages through England in rhymed Latin, under the pseudonym of Corymbaeus. The work was highly praised by Southey. Brathwayte is said to be an imitator of George Wither. (Check Pinder).
William Browne (c.1588–c.1643) A plaque in Tavistock
This poet from the ‘Tavy's voiceful stream’ produced elegies, anagram poems and echo verse. The young Keats was influenced by his work. Browne supplied a poem to Michael Drayton for the second book of his significant topographical work, Poly-Olbion. He also produced a variety of poetic forms, including elegies, anagram poems and echo verses. Browne dedicated his second volume of Britannia’s Pastorals (1616) to William Herbert, third Earl of Pembroke, and resided for a time at Herbert’s home, Wilton House, where contemporary visitors can enjoy the muted echoes of the Whispering Seat.
George Herbert (1593-1633) 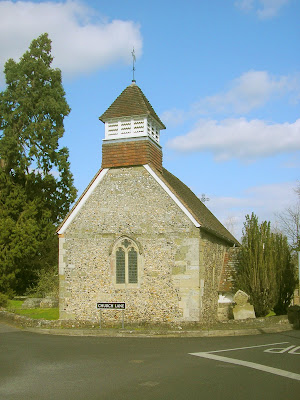 St Andrew's Church, Bemerton
near Salisbury and Wilton
Herbert, like Sir Philip Sidney, was a notable exponents of the form at a time when a piece of Echo Verse was sung in the presence of Queen Elizabeth I on her visit to Kenilworth Castle in 1575. Herbert’s poem, 'Heaven', demonstrates the role of the echo in diminishing verse.
Jonathan Swift (1667–1745)

From 'A Gentle Echo on Woman'

Swift also wrote a poem about An Echo.

Knox, the Roman Catholic theologian and friend of Evelyn Waugh, penned a masterful echo poem, ‘The Visitors’ Book, Hartland Quay’, which includes a Classical Greek pun on his name. Monsignor Ronald Knox is described on the back of The Knox Brothers by Penelope Fitzgerald (daughter of Ronald's brother, Edmund) as 'Roman Catholic chaplain to Oxford University's student body, preacher, wit, scholar, crime-writer and translator of the Bible.' Knox and his three brothers were the sons of an 'Evangelical Bishop of Manchester'. They all enjoyed poetry and puzzles. Ronnie, as he was affectionately known, has the distinction of being hailed as 'the wittiest young man in England' by the Daily Mail in 1924.

As we have noted, echo verse is often playful, witty and humorous. Knox, in his introduction to Essays in Satire writes that 'the pure humorist is a man without a message'. He states that (in his opinion) 'humour as a force in literature is struggling towards its birth in Jane Austen, and hardly achieves its full stature until Calverley. I know that there are obvious exceptions. There is humour in Aristophanes and in Petronius; there is humour in Shakespeare, though not as much of it as one would expect; humour in Sterne, too, and in Sheridan ... Under correction, then, I am maintaining that literature before the nineteenth century has no conscious humour apart from satire.'

Aristophanes, it seems to me, was one of the earliest known exponents of echo verse, and I suspect that Knox's echo verse poem (with its Greek pun) about Hartland Quay gives a nod in passing to the 'humorous' comic poet of Greek antiquity. His poem, which you can read in the text of Juxta Salices (link to book) ends with the following couplet, hinting that in the Doric Greek of the poet, Pindar (in which the word for Echo becomes A-CH-A in the transliterated form, rather than E-CH-E of the Ionian script), Echo's identity is closely linked with the poet's own:

Return to Echo Index
Posted by Caroline Gill at 14:34